When they found me, I had no name.
Because I had no name, they decided to give me one.
It’s not my real name, but I liked it and now it’s mine.

A dead man is found on the fields of autumn. Only he wasn’t really dead – but he’s not exactly what you could call alive, either.

Despite that, he is taken in by the Archer family, where they integrated him into the Eighteenth Century colony of Windbridge, Connecticut.

However, his shady past eventually catches up with him, as this man neither changes in age nor dies, and seems to possess another talent that he cannot fully understand… or control. 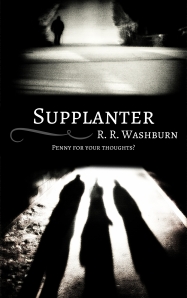 They did not realize
that they were dreaming…

Hannah Vallejo was born with a gift. She sees things most people cannot. When she is abducted by a man at the age of ten, it is up to these gifts and her own wits to escape. But her actions and survival may come with heavy burdens that will forever change her.

Jacob Wong has always been a troubled young man, now estranged by his brother after being arrested for petty theft and vandalism. In an attempt to put some old ghosts to rest, he returns to his family home he thought to be abandoned, yet finds that someone is there waiting for him.

William Blue sleeps but never dreams. It isn’t until he loses his wife and son in a freak accident that he is plagued by nightmares. Nightmares that come to him in isolation after spending some time in an old cabin, where he begins to battle for his own sanity with an entity that desperately wants something from him.

Three yarns, born separate but somehow tied together by a supplanter with the intent to destroy them.