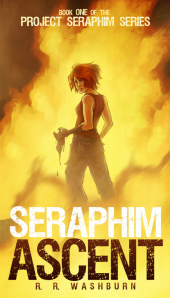 BOOK ONE of the PROJECT SERAPHIM Series

“Power is in tearing human minds to pieces
and putting them together again in new shapes of your own choosing.”
― George Orwell, 1984

After waking up in the morgue of an abandoned sanitarium, Rey has only a toe tag to her name and no recollection as to how she got there.

In a country staggered by a global war called the Long Winter, she will also find herself in its capitol now reigned under martial law by a totalitarian government, which alters the personalities of some of its citizens with what is known as the Permutation Regimen.

As a result of this regimen, riots have stirred the city by a group of activists calling themselves the Vorpals, orchestrated by a man named David Wednesday and his friend, Enid Lyall. They are also helped by a government employee, Tejinder Wakeman, who is caught in the middle of a conspiracy that may compromise the life as he knows it.

Though her memories are fractured, Rey finds that her connection to various people she does not seem to remember having ever met. What more, if she has any hope to uncover her identity, she must follow a trail that she can only venture with the help of the Vorpals.

They say that time heals, and the truth will set you free. But as Rey draws closer to her destination, she learns that she is linked to both sides of a blood-spattered coin, and her role in it all will beg to question if the truth is a skeleton she wants digging out of the closet.

Seraphim ASCENT is the first book of an adult post-apocalyptic/science fiction/horror series, set in a mid Twenty-Second Century dystopian society.

You can BUY Seraphim ASCENT at